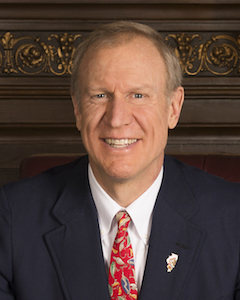 SPRINGFIELD — Gov. Bruce Rauner hammered away Wednesday on the need for fundamental change in the way Illinois operates, while Democratic leaders blamed Rauner for the state not yet having a budget.

Republicans, on the other hand, blamed Democratic leaders.

A leading Democrat countered, asking whether Rauner was willing to consider the idea that Illinois’ government shifts too much of the education-funding burden to the local level.

And so it went Wednesday as the first-term Republican governor and the Democrats who hold supermajorities in the General Assembly continued their battle.

While Rauner, R-Winnetka, softened his rhetoric and made pitch for conciliation, he also made clear he’s not backing away from his “Turnaround Agenda,” which he says is necessary to improve Illinois’ sorry financial condition and halt an out-migration of jobs and people.

Those agenda points include local property tax freezes coupled with “local options” for governments to cut costs by opting out of prevailing wage laws and contracting rules, as well as diminishing collective bargaining for public employees.

While Democrats say Rauner’s programs are hostile to the working class and especially unionized labor, Rauner says it’s the state’s job to provide an environment where economic opportunities are available for everyone.

“Illinois’ existing policies were meant to help working people and the middle class but are now having just the opposite effect,” Rauner said.

Senate President John Cullerton, D-Chicago, issued a statement after the speech commending Rauner for his willingness to work with Democrats on items including a pension reform bill.

But Cullerton also criticized Rauner for the lack of budget for fiscal year 2016, which began July 1, 2015.

“We're not honoring our student aid commitments to college students. We're not providing any public support to our public universities and colleges,” Cullerton said.

“That's all because of the stance the governor has taken over the state's budget,” Cullerton said. “He caused this. He can end it.”

The governor also focused on property tax relief, as he did often in his first year in office.

“One of the most critical ways to lower our cost of living and compete for more good jobs is to reduce our property tax burden,” he said.

“We have the second-highest property taxes in the country. They are crushing homeowners and small business owners from one end of the state to the other.”

“Illinois property taxes are high,” she said. “They’re high because this state does not fund public education the way all the others do.

House Speaker Michael Madigan, D-Chicago, said “the governor's speech did not deal with the fact there is no budget for the current fiscal year.”

Madigan said four of the items the governor mentioned as the past year’s accomplishments — record primary education spending, a solution to the fiscal year 2015 budget deficit, landmark public safety legislation and reforms to unemployment insurance — came with Democratic cooperation.

“All of these things happened with the cooperation of people in the Legislature and in each instance, please understand, the governor did not demand his program, which would lower wages for middle-class families, (lower) their standard of living and send injured workers to welfare and the emergency room.”

“The governor originally asked for a large number of concessions on workers’ comp, but now they’ve backed off of that,” Syverson said. “We’re talking about simple reforms that every other state in the country has implemented."

Rauner did make a pitch for cooperation.

“To achieve a grand compromise, we must cast partisanship and ideology aside,” he said. “We must break from the politics of the past and do what is right for the long term future of our state. I’m ready – and it’s my genuine hope that you are, too.”

After the speech, rank-and-file Democrats and their legislative leaders said they would work with the governor, but he’s not going to get everything he wants and must show some movement toward compromise solutions.

Additionally, Democratic leaders disputed the GOP’s taunt that Democrats simply want a tax increase and could pass one on their own should they muster the political nerve. They say absent a deal with Republicans, the Democratic votes aren’t there.

Republican leaders said they’re standing with Rauner, and they questioned just how far Democrats have shown themselves willing to move.

“I didn’t hear one word about being willing to talk about the things governor has talked about in terms of long-term reform for this state,” said Senate Republican Leader Christine Radogno of Lemont.

“What I saw once again was a brick wall (or Democrats saying) ‘I’m willing to do it as along as it doesn’t affect the status quo and the people that keep me in office,’ ” she said.

Want to get notified whenever we write about Senate President John J. Cullerton ?

Sign-up Next time we write about Senate President John J. Cullerton, we'll email you a link to the story. You may edit your settings or unsubscribe at any time.