Bankruptcy bounces around as backup plan 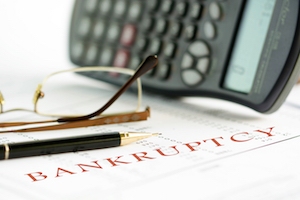 After two years without a budget and a failed attempt to compromise on a "grand bargain," some in Illinois are asking whether bankruptcy is a viable way out of the state's financial morass.

The Illinois Policy Institute has said that state and local debt stands at $267 billion and is growing, amounting to an additional tax burden of $56,000 per Illinois household. Chicago alone owes $63.2 billion in health insurance, pensions and other debt.

Unfortunately, there are some serious roadblocks: like the fact that the U.S. government won't allow it.

“I don’t know whether bankruptcy ultimately is the answer for Illinois or some Illinois cities, and it seems unlikely that Congress will enact legislation permitting a state to file for bankruptcy, but having a bankruptcy option does offer important benefits when a city or other public entity is in serious financial distress,” David Skeel told the Chicago City Wire.

Skeel is a professor of corporate law at the University of Pennsylvania Law School and an expert on municipal and state bankruptcy.

“It (bankruptcy) provides a way to restructure unsustainable obligations that may otherwise be impossible to restructure, for instance, and it ensures that every constituency will share in the necessary sacrifice, rather than just one or two constituencies,” Skeel said.

Skeel said that while states usually can get through periods of financial difficulty, Illinois has proven a particularly difficult case because of the political polarity.

“These problems can sometimes — not always, but sometimes — be addressed through the political process,” he said. “There sometimes comes a point, however, when politics alone can’t solve the problems.”

It’s conceivable that Chicago could file for bankruptcy, as could other Illinois cities. In fact, Detroit filed for Chapter 9 bankruptcy four years ago.

“Cities often wait longer to file for bankruptcy than they should have, and the city of Detroit was no exception,” U.S. Judge Steven Rhodes said at the Detroit ruling that allowed the bankruptcy to proceed.

Pete Saunders, a Forbes contributor, wrote at the time that the approximately $20 billion in debt was by far the largest bankruptcy filing by a U.S. municipality. Were Chicago to file, it could dwarf that figure.

And there might not be any reason not to. Skeel said that while the federal government won’t allow a state to file for bankruptcy, it has to let cities.

“Congress can’t interfere with Illinois’ right to decide whether to allow its cities to file for municipal bankruptcy because this would be viewed as an unconstitutional interference with state sovereignty, in violation of the Tenth Amendment of the U.S. Constitution,” Skeel said.